The Microlight ML830® Cold Laser, started everything 25 years ago. It was developed in 1985, by leading european doctors and engineers. The laser was brought to the USA in 1990, and was the first 3B laser cleared by the FDA in 2002. 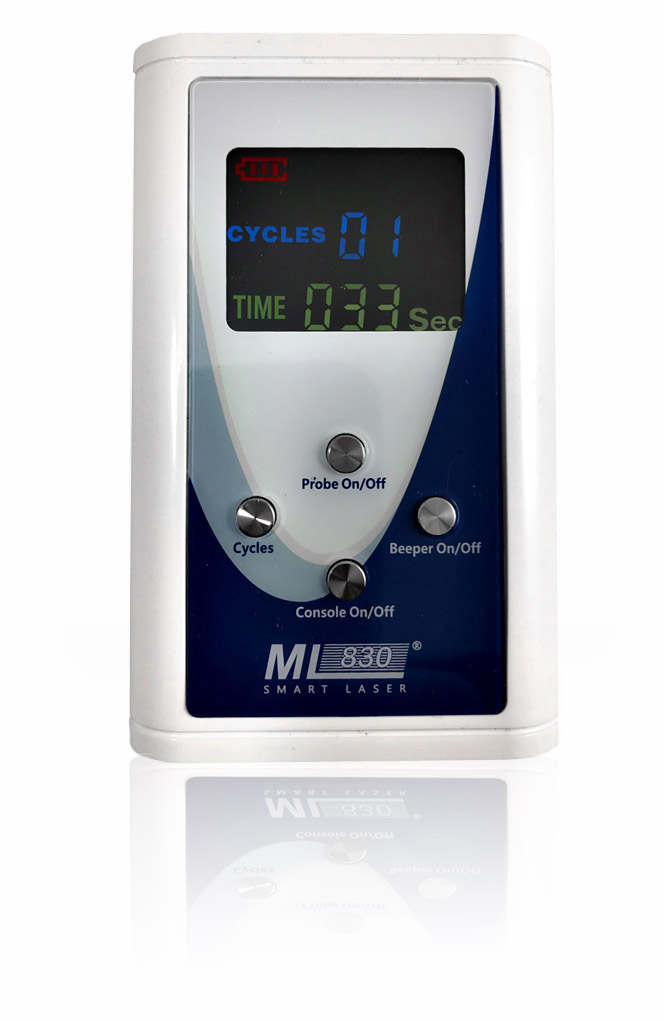 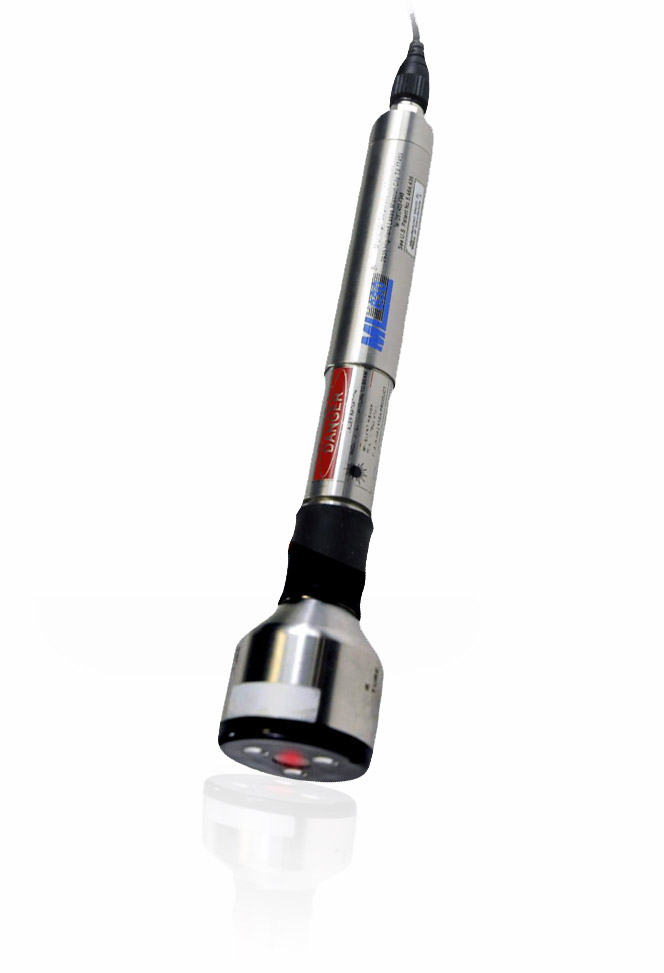 1. The Microlight 830 Laser is indicated for adjunctive use in the temporary relief of hand and wrist pain associated with Carpal Tunnel Syndrome.

The Microlight ML830® is a handheld, battery-operated, noninvasive, light-emitting, medical device. Approved by the FDA for sale and use in the treatment of a variety of soft and connective tissue disorders as well as certain neurological disorders, this device is a low energy laser also known as a “cold laser.” In contrast to general surgical or cosmetic lasers that produce heat and thermo-destructive laser energy, Low Level Laser Therapy (LLLT) produces no harm to human tissue in normal use and thus is classified by the FDA as a Class IIIB medical device. Cold lasers used in LLLT have been in medical use for over 30 years and have a long record of successful clinical studies demonstrating medical efficacy and safety. The Microlight ML830® produces infrared (invisible) laser light at the 830 nm wavelength via three LASER diodes. A fourth visible LED (Light-Emitting Diode) is used to provide a visible red target light field for the clinician to target the desired tissue area. As a noninvasive contact medical device, the Microlight ML830® is completely portable, very easy to operate and provides reliable and effective treatment options to the clinician and patient.

Through the action of photo-stimulation of light reactive biological receptors (chromophores) in the body, Low Level Laser Therapy (LLLT) has demonstrated the ability to significantly accelerate and enhance the body’s natural defense and repair components in the presence of injury, inflammation and certain disease processes. By modifying the effects and limiting the duration of inflammation as well as enhancing specific repair and healing processes, LLLT is consistent in providing pain relief, reducing injury damage and loss of function, in addition to facilitating more rapid repair and stronger healed tissue structures. Multiple clinical studies have noted the following results of LLLT:

Through the action of photo bio-stimulation, oxidative metabolism is increased via cytochrome C oxidase and photosensitization of hemoglobin. Laser irradiation stimulates increased endorphin release and increased prostaglandin synthesis. Due to the powerful effect photo-stimulated enzymes exert, both localized and systemic cascade reactions occur that result in immunomodulation and inflammatory mitigation. Damaged skeletal, connective and neurological tissues and structures react with enhanced healing in the presence of low level laser irradiation as collagen synthesis and production, satellite cell presence and cellular metabolism are increased as a result of the light stimulation and improved vascular, lymphatic and enzymatic activity.

The ML830 is a GaAlA Laser that has wavelength of 830 nm with a power output of 90 mw. At this wavelength and power the ML830 Laser has a penetration of approximately 5 cm with a 3 cm lateral spread.

It is not an accident that the Microlight Corporation of America chose & patented the 830nm technology for its ML830®. There are 30+ years of clinical studies that proved the 830nm range is the optimal wave-length.

When evaluating the sometimes confusing and varied choices in low level lasers , the question is frequently asked, “why is the 830nm wavelength better ”? The answer to this question is essentially one of penetration and delivered energy. In the treatment of soft and connective tissue injuries and disorders, the goal is to deliver the most effective laser wavelength to the target tissue.

Some 30+ years of scientific study and clinical research has provided us with detailed information on the reaction of biologic organelles to laser light. It has also shown us which wavelengths penetrate most deeply and what energy levels effect biological processes in the most desirable manner. We need to fully understand the relationship between the depth (from the skin surface) of the target tissue and the ability of the therapeutic laser light to reach that tissue.

We now have ample clinical evidence that in contrast to other wavelengths, the 830 nm laser light produces specific beneficial biological reactions that are not produced by other wavelengths. This unique ability to stimulate greater response is the key to 830nm laser therapy.

The longer 830nm (GaAlAs) invisible infrared wavelength, shown in yellow, is not as readily absorbed therefore it has significantly greater depth of penetration. A greater amount of photons are delivered to the target tissue with the 830nm wavelength.

It is also important to note that this study confirmed that the 30mW power output provides better results than the low power, 5-10 mW units in endorphin stimulation.

The ability of the 830nm wavelength to stimulate the production of pain reducing plasma endorphin levels, while other wavelengths did not, is important when clinicians are treating painful conditions.

Laser therapy has been used by leading scientists and clinicians around the world for over 20 years. In Japan, where laser therapy is considered a preferred medical practice, Dr. Noriko Mochizuki et al published a clinical study on the effect of laser therapy and ATP production.

In that study, the scientists found that tissue levels of ATP were significantly increased when the target area was irradiated with 830nm wavelength laser light. The study further stated that this beneficial increase in ATP production was not the result of temperature modification, but rather a direct response to the effect of laser light photons.

This study along with a host of other clinical reports confirm the singular ability of the 830nm laser wavelength to stimulate cellular responses that result in accelerated metabolism and repair.

Since ATP functions as the primary fuel for cellular activity, stimulated increases of this energy source greatly enhances cellular ability to perform and complete biological processes.

One of the major contributors to the effectiveness of low level laser therapy is the exchange of energy from light photons to the biological receptor.

In order to achieve any therapeutically significant response, there has to be sufficient photons delivered to the target tissue.

The availability of photons for stimulation is a function of both the appropriate wavelength and device power output.

These two factors determine the amount of photons reaching the desired location.

In treating conditions of greater than 1 cm in depth from the skin surface, the combination of the 830nm wavelength with a 30mW output produces the optimum photon beam.

With more than twice the penetration of the shorter 632 nm (HeNe) laser wavelength, the 830nm (GaAlAs) medical laser has the ability to provide healing therapy to damaged and injured cellular components in addition to enhancing the ability of circulatory and lymphatic systems to achieve maximum benefit.

Tendons, ligaments and muscle tissues that lie beyond the reach of the shorter wavelengths can be treated with the 830nm laser due to its unique deeper penetration characteristics.

Just as effective for surface conditions as other wavelengths, only the 830 nm wavelength can realistically treat deep tissue conditions.

The Long And Short Of It

Laser wavelengths below 800nm and above 850 nm quickly decrease in penetration and absorption capabilities.

Since we know that the target structures or tissues for most treatment modalities are deeper than just the superficial skin and subcutaneous tissue, the ideal wavelength is one that can penetrate beyond surface layers.

As seen in the illustration on the right, the longer (830nm) wavelength has both deeper light penetration and a different light absorption characteristic that enables it to deliver the needed laser light concentration to accelerate cellular functions and healing.

Studies conducted over 15 years and reported in over 100 clinical reports show the 830nm laser wavelength to be the most effective in therapeutic applications.

Absorption, Penetration, Power—They Are The Keys

Studies such as this absorption graph have been conducted and demonstrate that wavelengths above and below 830 nm are absorbed more and penetrate less.

The more of the laser light that is absorbed in the surface layers of the skin and tissue, the less energy there is to be transmitted to the deeper layers of tissue and structures.

As was found in this study, the 830nm wavelength has the least surface absorption, and therefore the deepest penetration and best effect.

In the final analysis, the clinical evidence and laser science is strongly in favor of the 830nm GaAlAS wavelength as the most appropriate wavelength for therapy involving deep tissues.

The other factor to consider is the power output of the device. While very low power output devices (510mW) can have therapeutic effect on surface or shallow tissue, the time needed for such low power devices to effect deeper tissue is impractical for therapy session.

The combination of the 830nm wavelength and a 30mW power output allows for deep photon penetration and reasonable time frames to deliver the needed energy dosage to the target tissue.

Longer (830nm) Wavelength Effective For Deep Pain Where Shorter Wavelengths Are Not Recommended Nor Effective.

The other issue in regards to wavelength is the capacity to deliver the necessary energy to the target tissue. While nearly all low level medical laser wavelengths can deliver some energy to surface tissue, therapeutic dosage of light energy to deep lying tissue cannot be accomplished with short wavelengths.

This chart from a leading medical laser textbook demonstrates that short (HeNe, InGaAlP) wavelengths are inappropriate for deep lying pain because such short wavelengths simply cannot reach the target tissue.

The 830nm (GaAlAs) wavelength is the most therapeutically effective wavelength for deep lying pain and healing deep tissue.

(1 J/cm2 and 5 J/cm2) of an infrared (JR) laser (820 nm), a visible red laser (670 nm) and a near-monochromatic light emitting device (660 nm, 30 nm bandwidth). ACTH was shown to have a cumulative response to treatment with 1 J/cm2 infrared laser (p < 0.001) and 5 J/cm2 red laser (p < 0.05) responding significantly.. b -endorphin was noted to be significantly elevated between days one and four (p < 0.05) in subjects who received IR (5 J/cm2) laser. Results indicated that the analgesic response to phototherapy may be mediated through hormonal/opioid mechanisms, and that responses to LLLT are dose and wavelength dependent, that is, there may not have been sufficient photonic energy to stimulate responses using 660 nm nearmonochromatic red light or low dose 670 nm (red) laser.

This study has confirmed that responses to LLLT are dose, power output and wavelength-dependent.. High dose (5 J/cm2) IR laser resulted in increases in plasma b -endorphin levels over the duration of the study suggests that localised, peripheral phototherapy of trigger points can induce cumulative activation of central hormonal /opioid pathways capable of regulating immune function. It is acknowledged that power density may have resulted in the fact that neither low dose nor high dose nearmonochromatic red light (660 nm) was found to be capable of eliciting significant changes in blood biochemistry.